Oracle addresses 231 CVEs in its final quarterly update of 2021 with 419 patches, including 36 critical updates. 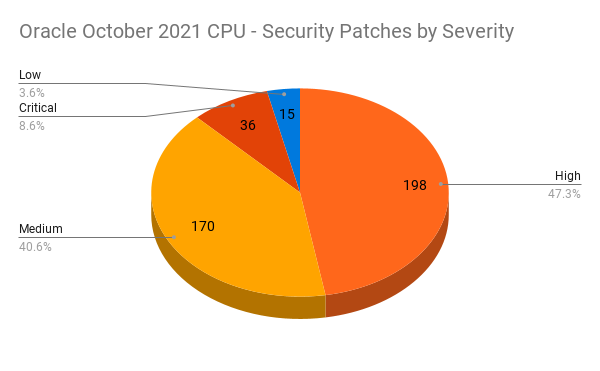 While these four product families did not receive security patches, Oracle notes that there are third-party patches included as part of its CPU release:

A full breakdown of the patches for this quarter can be seen in the following table, which also includes a count of vulnerabilities that can be exploited over a network without authentication.

The highest rated vulnerability in this quarter’s Oracle CPU was CVE-2021-35652, a vulnerability in Oracle Essbase, a business analytics solution. The flaw resides in Essbase Administration Services and requires no privileges to exploit. It was disclosed, along with four other vulnerabilities in this CPU by Guillaume Jacques, Paul Barbé and Théo Louis-Tisserand of synacktiv.

Customers are advised to apply all relevant patches in this quarter’s CPU. Please refer to the October 2021 advisory for full details.

A list of Tenable plugins to identify these vulnerabilities will appear here as they’re released.