CISA, the NSA and FBI issue a joint advisory detailing the top 20 vulnerabilities exploited by state-sponsored threat actors linked to the People’s Republic of China.

On October 6, the Cybersecurity and Infrastructure Security Agency (CISA) along with the National Security Agency (NSA) and Federal Bureau of Investigation (FBI) issued a joint cybersecurity advisory (CSA), identified as AA22-279A, outlining the top 20 CVEs exploited by the People’s Republic of China (PRC) state-sponsored threat actors since 2020. These vulnerabilities have been used to target a variety of U.S. and allied networks, including software and hardware companies with the explicit goal to “steal intellectual property and develop access into sensitive networks.” This advisory follows a similar advisory in October 2020, where the NSA published a list of 25 known vulnerabilities exploited by Chinese state-sponsored actors.

The following 20 vulnerabilities were included in the joint CSA: 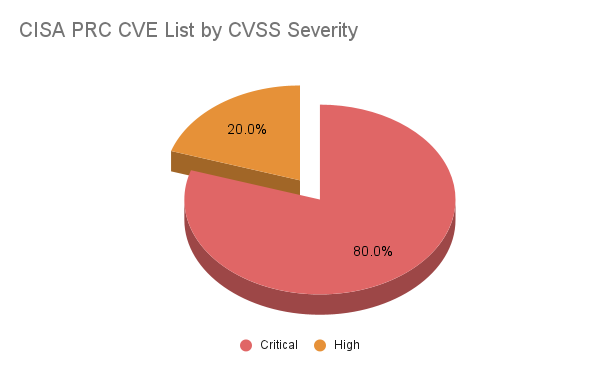 When reviewing the list of vulnerabilities included in the CSA, it’s hard not to notice the sheer volume of legacy vulnerabilities being leveraged by the PRC-sponsored threat actors. These flaws have been known for up to three years and have had patches available for some time. Yet, despite the availability of patches, threat actors find continued success in exploiting them. In fact, three of the vulnerabilities from the October 2020 NSA CSA were carried over into the latest CSA published on October 6, 2022:

Included in the list of 20 CVEs are a pair of flaws in Secure Socket Layer Virtual Private Network solutions from Pulse Connect Secure (CVE-2019-11510) and Citrix (CVE-2019-19781). Both flaws have been exploited in the wild by a variety of attackers from ransomware affiliates to advanced persistent threat actors. We called out both of these flaws as part of our 2020 Threat Landscape Retrospective report along with a dedicated blog post in 2021 emphasizing the need for organizations to prioritize patching these flaws. They clearly remain some of the most valuable vulnerabilities in-use today.

All of the vulnerabilities referenced in the CSA have patches available for them. We strongly encourage customers to review the vendor advisories and apply the available patches as soon as possible to eliminate these known attack paths.

A list of Tenable plugins to identify these vulnerabilities can be found here. This link uses a search filter to ensure that all matching plugin coverage will appear for the vulnerabilities referenced in this blog post.

Satnam joined Tenable in 2018. He has over 15 years experience in the industry (M86 Security and Symantec). He contributed to the Anti-Phishing Working Group, helped develop a Social Networking Guide for the National Cyber Security Alliance, uncovered a huge spam botnet on Twitter and was the first to report on spam bots on Tinder. He's appeared on NBC Nightly News, Entertainment Tonight, Bloomberg West, and the Why Oh Why podcast.

Several flaws in Microsoft Exchange Server disclosed over the last two years continue to be valuable exploits for attackers as part of ransomware and targeted attacks against organizations that have yet to patch their systems. Patching the flaws outlined below is strongly recommended.

Sandworm, the Russian-backed APT responsible for NotPetya in 2017, has recently attacked an Ukrainian organization using a new wiper, SwiftSlicer.