The Apache HTTP Server Project patched a path traversal vulnerability introduced less than a month ago that has been exploited in the wild.

Update October 7: The Solution section has been updated to reflect the secondary fix the Apache HTTP Server Project released.

On October 5, the Apache HTTP Server Project patched CVE-2021-41773, a path traversal and file disclosure vulnerability in Apache HTTP Server, an open-source web server for Unix and Windows that is among the most widely used web servers. According to the security advisory, CVE-2021-41773 has been exploited in the wild as a zero-day. The vulnerability was disclosed to the Apache HTTP Server Project on September 29 by Ash Daulton and the cPanel Security Team. However, the advisory does not indicate when exploitation of CVE-2021-41773 was detected, but it stands to reason that the exploitation drove the expedited release of a patch.

In a default install of 2.4.49 you'll only be able to access things in the document root or cgi-bin directories

Successful exploitation would give a remote attacker access to arbitrary files outside of the document root on the vulnerable web server. According to the advisory, this flaw could also leak “the source of interpreted files like CGI scripts” which may contain sensitive information attackers can exploit for further attacks.

According to a Shodan search, just under 112,000 Apache HTTP Servers are running the vulnerable version. However, other vulnerable web servers might be configured to not display version information.

In the same release, the Apache Server HTTP Project addressed CVE-2021-41524, a null pointer dereference vulnerability which could lead to a denial-of-service condition that also only impacts version 2.4.49.

Positive Technologies Offensive Team, PT Swarm, announced on Twitter that they had reproduced the vulnerability. Shortly after, another user replied with the proof-of-concept (PoC) payload. Other PoCs have been shared on Twitter and we expect working exploit scripts will be published shortly. 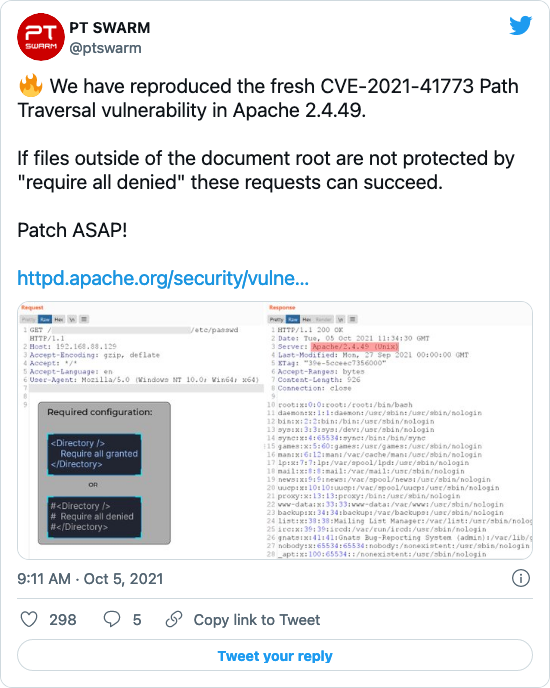 All users should ensure that they update to the latest version of Apache HTTP Server. On October 7, the Apache HTTP Server Project released version 2.4.51 because the original release (2.4.50) didn’t fully address CVE-2021-41773. Because Apache HTTP Server 2.4.49 was released on September 15, 2021, there is a chance some users have not yet updated to the vulnerable versions.

Claire Tills is a senior research engineer with Tenable's Security Response Team. Previously, she was product marketing manager for Nessus and Tenable Research. Before joining Tenable, Claire worked for the FS-ISAC upon receiving a Master’s degree in communication, with a focus on information security.